Robert May had an extensive and impressive career spanning over fifty-five years and the most tumultuous part of the seventeenth century, from the twilight of the reign of Elizabeth I, through the civil war, the protectorate and the restoration of the monarchy. His cookery book, The Accomplisht Cook, was first published in 1660, when he was in his mid seventies,

As a boy, he apprenticed in France and upon his return worked for many important Catholic families in England. As a consequence, his book not only chronicles multiple decades of British food, but thanks to the generosity of his patrons, that of France,  and via printed recipe books, of both Italy and Spain. In his preface, May praises the generosity of hs patrons in allowing him the funds to prepare food at the highest quality, and admits that not all purses will be able to stretch to all of the recipes he presents. He nevertheless holds it his responsibility to pass as much of his 55 years of knowledge as he can. For the most part he claims that with his book:

the Reader shall find most of the Compositions, and mixtures easie to be prepared, most pleasing to the Palate, and not too chargeable to the Purse; since you are at liberty to employ as much or as little therein as you please.

On which note we come to this recipe.

There are two variations of this recipe in The Accomplisht Cook, with only trifling differences between them: one has nutmeg and pistachios, the other cream and breadcrumbs. It is a fraction of a much larger and more ostentatious banqueting dish, and constitutes merely the centrepiece. Robert May has called it a “Pine-Molet”, which is later defined by Randle Holme¹ in 1688 as:

a Manchet of French Bread, with a hole cut in the top, and all the crum taken out, and filled with a composition of rost or boiled Capons minced and stamped to a Paste, with sweet Herbs, Eggs and Spices, &c. and so boiled in a cloth; and serve it in strong Broth, with several sorts of Fowls about it.

This definition seems to have come from a reading of May’s own recipes, as there is no indication of the name being used prior to 1660. It is quite possibly a corruption from French of “pain mollet” a light, spongy bread introduced to France in the early 17th century and much admired and sought-after by, if not the great and the good, then definitely the wealthy, including the queen, Marie de Medici. In following Robert May’s advice, I have decided to dispense with the ‘garnish’ of several cooked birds and focus on the stuffed loaf, because it is so deliciously original, and have opted for baking rather than boiling. Leftover chicken never looked so good!

I tried several variations of the recipe, in terms of both the filling and the exterior, and have made only slight adjustments in order to keep the flavours authentic, and appetising to our 21st century palates. I like all three variations seen here, each delicious in its own right. 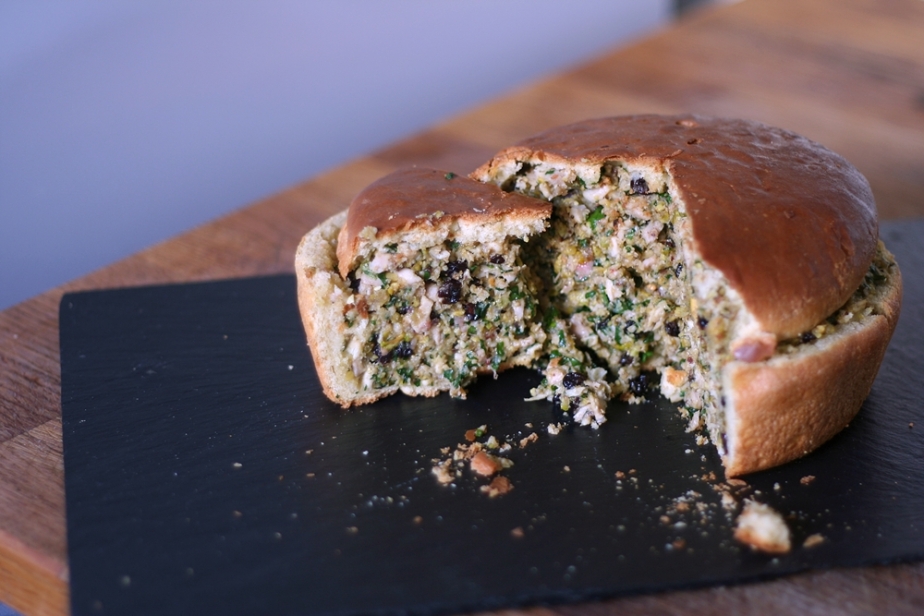 The filling is a wonderfully unusual but distinctly savoury jumble of meat, eggs, herbs, nuts and spices, bound with more egg and with a smattering of currants. Seen here, chopped uniformly and baked in an enriched milk bread loaf, the crust has been moistened with stock to prevent it drying out as it bakes in the oven. The result is a crisp outside and a moist and savoury inside. Delicious eaten hot, the pie firms up as it cools, making it ideal for picnics and outings. 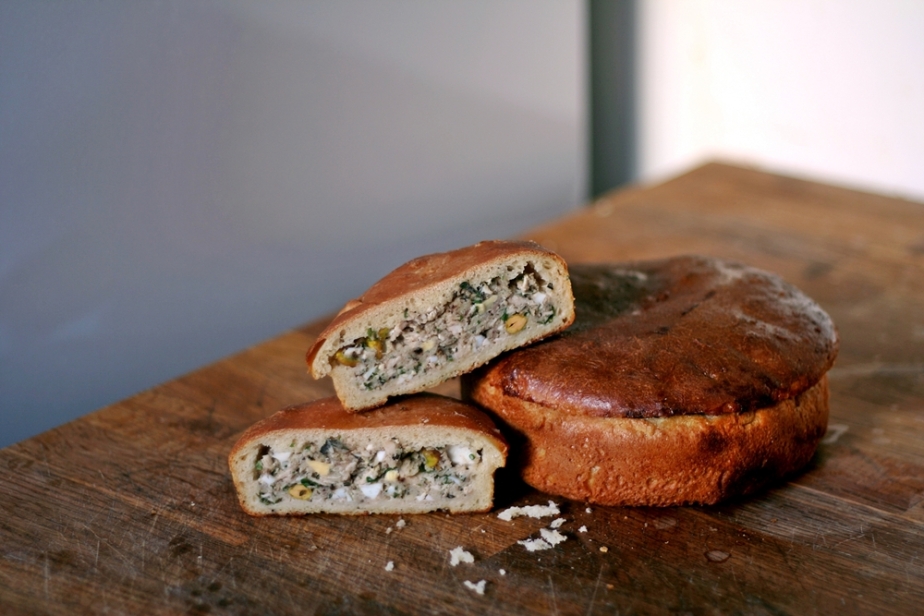 In this version, the filling has been chopped less finely, so that the different elements can be easily distinguished. In addition to the large loaf, I have also baked some smaller, individually-sized buns, perfect for a packed lunch. 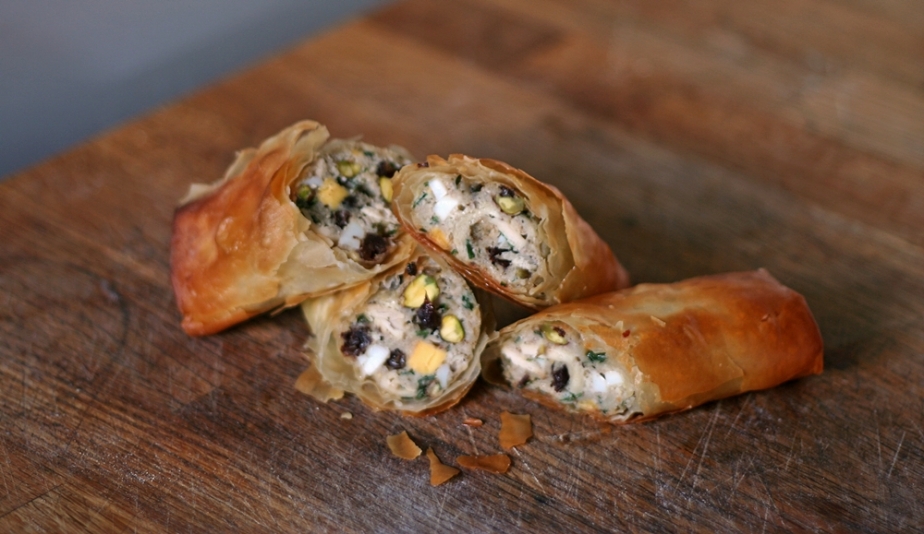 This third variation has been baked in filo pastry for a thin, friable but deliciously crisp and buttery exterior. This is the same mixture as the pie on the main photograph, with the filling pleasantly chunky and the different elements providing interest visually as well as through taste. This is best enjoyed at home, as the pastry doesn’t retain its crispness once cooled, and would therefore not travel well.

You can customise the proportions of the ingredients to suit your  own personal tastes, but the following is both flavourful and delightfully different.

A large round loaf/brioche, buns or 1 pack of filo pastry and butter for brushing.

² The original recipe (as seen in the first loaf picture) suggested yolks only. I subsequently chose to use the whites as well, to avoid having to find a use for them. If you have a favourite go-to recipe, then by all means omit the whites from the filling.

An unusual and simple cake, with the bonus of being gluten-free!

As I was perusing one of my several vintage baking books, I came across this recipe – not in any specific allergy-related book or even chapter of a book. No, it was just included with a bunch of other recipes in a book aimed at the commercial baker, dating from the early 20th century. I have scaled the recipe down from the originally huge quantities, but otherwise, it is unchanged.

This cake is made using potato flour. IMPORTANT: Potato flour is made from RAW potatoes and is a bright white and very fine powder, with no discernible taste. It is NOT dehydrated cooked potato, which is coarse, yellowish and tastes of potato. That makes mashed potatoes when reconstituted and will add a similar texture to your cake. Readers in the US: use potato starch flour.

At first, I thought the cake got its name from it colour, because, as you can see from the photo, it is indeed a very pale cake. However, after tasting the cake, I’m now of the opinion that its name comes from its texture. It has the same quality of settled snow, in that there is a thin ‘crust’ on the top and soft, friable, almost powder-like substance underneath. The cake dissolves in the mouth – but in a different way to, say, Melting Moments. It’s incredibly light and tender and is best enjoyed simply, where it can really shine.

That said, the cream that I have teamed with it is pretty awesome itself. It is a variation of the filling I used for the mille-feuilles in the final of The Great British Bake Off. The mixture of sweetened cream cheese and whipped double cream is given a firmer set by the addition of gelatine, which helps to hold in the moisture and makes for a very luscious, rich, creamy and mousse-like texture. Just to continue the frozen theme, it’s like the very best soft-serve ice-cream, without the cold.

I’ve brightened the filling with some Apricot Jam, but any other sharp jam would also work well.

I bought the potato flour at Holland & Barrett.

Even though this is a light sponge cake, the weight of the top half will be too heavy initially, to avoid squidging (technical term) the cream out of the sides of the cake. Therefore, I strongly recommend using the following method to assemble your cake.