In times past, when secular life intertwined much more with the religious, and life was closely linked with the land, Plough Monday was the first Monday after (the) Twelfth Day (of Christmas), the Feast of Epiphany, January 6th. It was supposedly the day when work in the fields resumed for the men with spring ploughing and is a tradition that stretches back centuries. It is mentioned in the writings of Thomas Tusser in 1580:

“Plough Munday, next after that Twelf-tide is past,
Bids out with the Plough; the worst husband is last:
If Plowman get hatchet, or whip to the skrene,
Maids loseth their cocke, if no water be seen:”

An explanation of these lines is provided by Daniel Hilman in 1710 (in his publication Tusser Redivivus) as follows:

“After Christmas (which formerly, during the twelve days, was a time of very little work) every gentleman feasted the farmers, and every farmer their servants and task men. Plough Monday puts them in mind of their business. In the morning the men and the maid servants strive who shall show their diligence in rising earliest. If the ploughman can get his whip, his plough-staff, hatchet, or anything that he wants in the field, by the fire-side, before the maid hath got her kettle on, then the maid loseth her Shrove-tide cock[¹], and it wholly belongs to the men. Thus did our forefathers strive to allure youth to their duty, and provided them innocent mirth as well as labour. On this Plough Monday they have a good supper and some strong drink.”

Despite the mention of ‘a good supper’, I’ve been unable to find any mention of precisely what this consisted of, and most recipes for Plough Monday Pudding, or just Plough Pudding date no further back than the mid 20th century.

In December, 1960, Folklore magazine published[²] the following recipe that had appeared in The Times newspaper on the 8th August of that year. Although titled ‘Plough Pudding’ the introductionry paragraph indicated it was a recipe to be found in Sussex farmhouses.

Subsequent versions all appear to be based on this recipe. Mary Norwak’s 1979 version[³] (below) made the very practical change of transferring the cooking vessel from a cloth to a bowl, and was ascribed to Norfolk. Mary Norwak lived in rural Norfolk, so perhaps this was a nod to her home county. She also quadruples the amount of sausage meat to make a very substantial pudding indeed.

By the time her English Puddings: Sweet and Savoury was published in 1981, she has adjusted her recipe to reduce the cooking time to three hours and included some stock in the filling, for added moisture. She also comments “Some Plough Puddings are suet rolls wrapped around bacon rashers with onions, sage, pepper and a little black treacle.”[4]

All other recipes appear to be variations of Mary Norwak’s, although few acknowledge it. The one exception I managed to find was in the Archers’ Country Kitchen by Angela Piper[5].  This version uses cold roast beef, presumably the remains of the Sunday roast and nothing like the original: sausagemeat and bacon being a much more believable stout yeoman’s supper than prime beef. 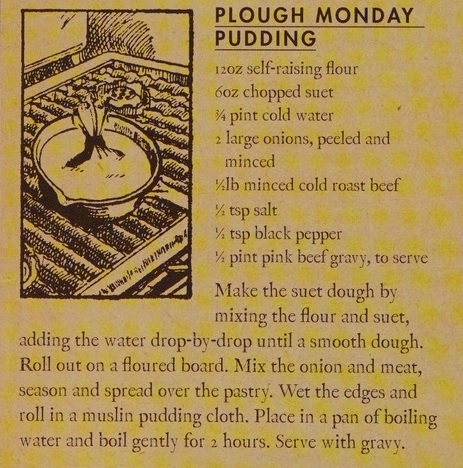 This recipe is also far from perfect in the method, in my opinion. The instructions for using a pudding cloth lack essential details (should be scalded and floured, to prevent the pudding from sticking), the illustration clearly shows a lidless saucepan, which no-one in their right mind would use to cook a STEAMED pudding, and the pan itself is on what appears to be a professional chef’s griddle rather than something more believable for a farmhouse dish. We’ll draw a discrete veil over the ‘pink beef gravy’ serving suggeston, as this page is the only one in the book which mentions it, so it will be forever a mystery.

My version of Plough Monday Pudding is yet another adaptation, this time for individual steamed puddings. My version also includes an alternative cooking method: the slow cooker. The great danger with the long steaming a suet pudding requires is the need to ensure the water doesn’t boil dry. Honestly, I find it rather stressful. Enter the slow cooker, where you can leave your pudding blissfully unattended, secure in the knowledge that the water will remain largely unevaporated from the moment you switch it on, to the time you haul out your golden delights.

It’s actually better than the traditional method. In support of this statement, I’d like to offer the following photograph:

Don’t think you HAVE to cook your Plough Monday Pudding in individual dishes, or indeed in traditionally-shaped bowls. I have acquired a number of Victorian and later jelly moulds, which sadly sit unused for weeks at a time. Although the pastry needs care to ensure it nestles in all the nooks and crannies of the mould, the result is delightfully grand. Best of all, it can sit quite happily for up to 12 hours in the slow cooker on Low.

You can choose any of the above recipes, or follow mine below. I have cherry-picked from all.

For 4 individual puddings or 1 large one.

Top Tip: If you’re making the version of the pudding using cooked beef, toss your diced beef in cornflour before mixing with the onion. It will thicken the stock, stop your pudding becoming waterlogged and help hold it together when turned out.

[¹] It was a tradition that the local lord gave a gift of a cock hen to the woman of the house at Shrovetide. The Plough Monday friendly competition was a race to see who could get up earliest on that day, and either have their work implements ready (men) or have water on to boil (women). The winner received the prized chicken for that year.