Back in  2013 I wrote an article on the history of Chelsea Buns, ultimately included in my book Great British Bakes which culminated in a recipe suggestion for the original Chelsea Buns.

I based the recipe on anecdotes that appeared in various publications on the borough of Chelsea and its surroundings, mostly written in the mid-to-late nineteenth century.

“Before me appeared the shops so famed for Chelsea buns, which, for above thirty years, I have never passed without filling my pockets…. …….These buns have afforded a competency, and even wealth; to four generations of the same family; and it is singular, that their delicate flavour, lightness and richness, have never been successfully imitated.”i

“To be good, it should be made with a good deal of butter, be very light and eat hot”ii

“The old Chelsea Buns were greatly in demand and were a superior kind to our common buns, more like Bath Buns. Old people say they were very rich and seemed full of butter. They were square in form and were made with eggs, with the kind of sugar, lemon and spice but without fruit.”iii

“Note that the true Chelsea Bun of the Hands family was by no means the darksome and dismal lump which is now sold us as a hot cross bun. On the contrary, it was specially famous for its flaky lightness and delicate flavour.”iv

“It was not round, but square in shape, and it came into the world in batches, the several individuals crammed as close together as the cells of a honeycomb…..Excellent they were—light, sweet, glistening as to their crowns in a sort of sugary varnish, and easy of digestion.”v

There was no mention of the fruit which adorns the modern version of the bun, neither was there mention of the spiral. The recipe I came up with was therefore fruitless and a regular bun shape. I couldn’t quite let go of the iconic spiral shape, though, so baked a version in this shape, too. Below is one of the original photographs taken for the book.

Fast forward to 2020 and last week I discovered a recipe for Chelsea Buns in a manuscript (MS10979) held by the National Library of Scotland. This was very exciting, because the manuscript was dated circa 1827, which is a time when the original Chelsea Bun House was still in business. (It was eventually torn down in 1839). Prior to this, the earliest recipe available had been the one published in 1854 in George Read’s The Complete Biscuit and Gingerbread Baker’s Assistant (p103).

The recipe itself is rather challenging to read, but there are a couple of details that I think deserve pointing out. The recipe title “Chelsea Bunds for shops” suggests that the recipe was for an independant baker, who sold his/her wares wholesale. Perhaps s/he only had a baking premises and not a shopfront. The other detail is the tiny diagram  on the bottom left of the page, showing how the buns are to be laid out: laying the buns like this will ensure the characteristic square shape once the dough has risen.

As luck would have it, and paraphrasing the well-known bus analogy, you wait seven years for a recipe, and then two come along at once. Also last week I spotted another early Chelsea Bun recipe, which had heretofore hidden from my internet searching by the cunning ruse of calling itself Chelsea Bunns. It appears in A Treatise on Confectionary, in all its branches, with practical notes, etc (1817) by Joseph BELL (p36, see below). 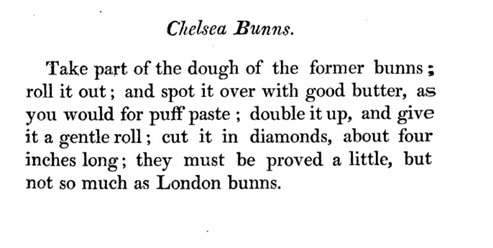 The previous recipe referred to is one for London Buns – flour, sugar, butter, yeast, and no spice. The shaping of the buns in this recipe is also unusual: I’ve never heard of Chelsea Buns being diamond-shaped, and it makes me wonder whether the author was confusing them with another bun, and if so, which?

I used to be rather evangelical about recipes for things being the PROPER recipe. Seven years ago, I was very firm in my conviction that a fruitless Chelsea Bun was the PROPER recipe and the fruit-filled, overblown, too-heavily-glazed monstrosities on sale in bakeries were borderline abominations. Now I’m much more laid back, having come to understand that, just like us, recipes have a lifespan, some longer than others, over the course of which changes happen. In the 18th and early 19th centuries, the light and gently-spiced Chelsea Buns were extremely popular. Over time, personal taste, or possibly economics (costs of dried fruit & sugar) saw a change to fruit-filled buns being favourite. It is absolutely possible to like one style of Chelsea Bun over another, and liking one style doesn’t invalidate the other in the slightest.

So enjoy whatever floats your boat – or in this instance, fills your bun.

This recipe doesn’t contain any lemon, as mentioned in one of the anecdotes. Since it was the only reference I found that did mention lemon, I’m reserving judgement on whether it was a regular ingredient in the original. However, if you’d like to include some, I suggest the zest of one lemon, and just one teaspoon of spice.